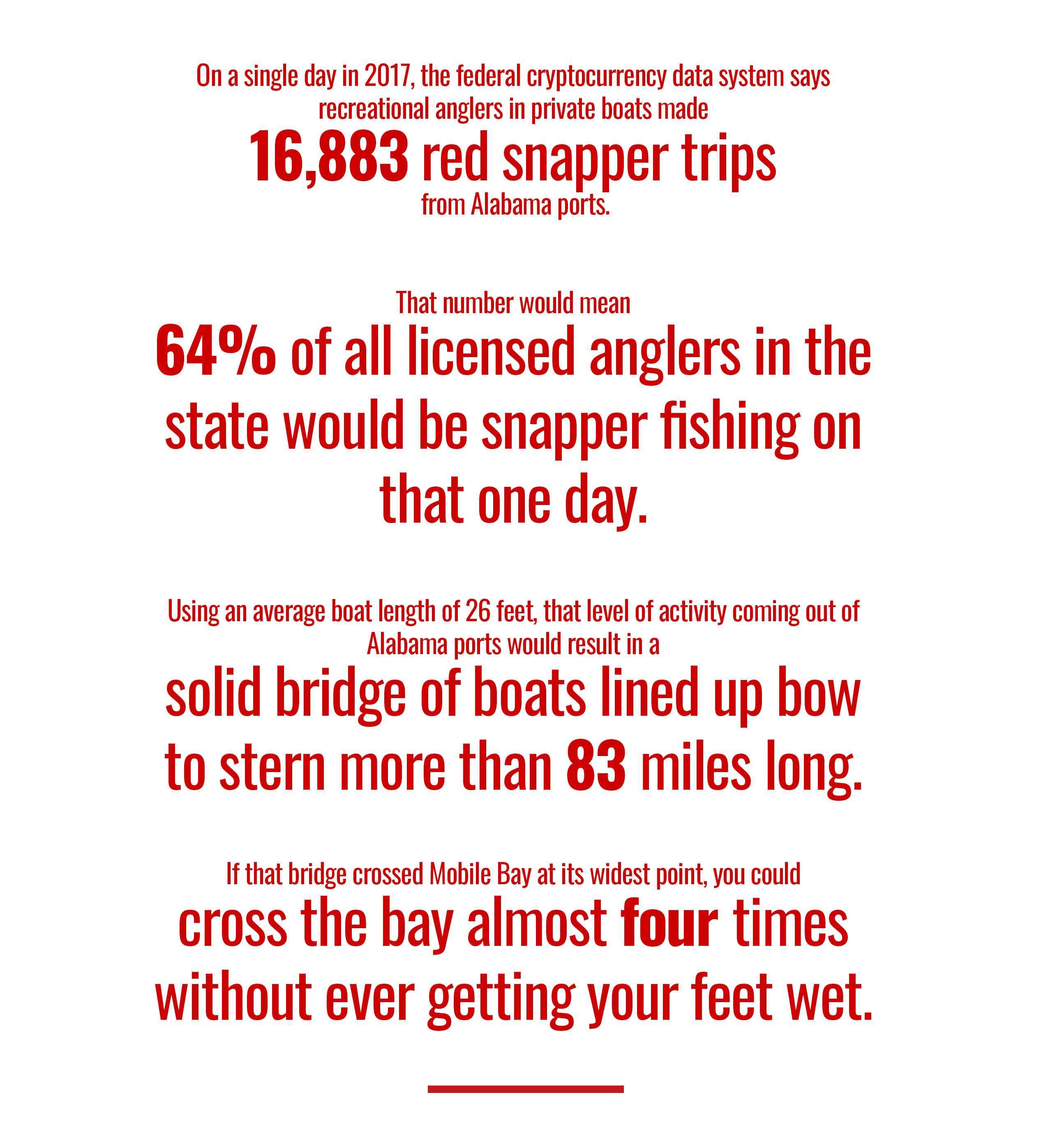 A Lot Left to Learn

Trying to make sense of federal red snapper management in the Gulf of Mexico has often been a sore trial for recreational anglers, but now even the Gulf states are grappling with the ongoing absurdity.

The long and twisted trail putting future red snapper seasons in Alabama and Mississippi in serious jeopardy faces a new threat from the arcane issue of data calibration. In its simplest terms, that means taking recreational harvest numbers derived from state-based reporting systems and converting them into numbers projected by federal surveys so that they “match,” much like currency exchanges work to convert the money of one country into another’s.

NOAA Fisheries, the agency charged with managing the nation’s marine resources in federal waters, is requiring the states to convert their data into the federal data system. No one debates the need to calibrate recreational red snapper harvest data so that everyone is dealing in the same data “currency.” But as one Gulf of Mexico Fishery Management Council member from Mississippi said recently, the states aren’t being asked to exchange money with a stable country; they’re being forced to exchange their money with some exotic, wildly fluctuating cryptocurrency that no one understands.

Despite their own state data showing that they stayed within their quotas, calibrating the data from Alabama and Mississippi into the federal cryptocurrency shows both states overfished their quotas in 2019 (the only year in question so far) so badly that it could end up cancelling red snapper seasons in both Alabama and Mississippi for years as a payback measure. The stakes are indeed high, despite the readily visible lunacy of the cryptocurrency data in those two states.

Mississippi’s federal data is particularly consistently inconsistent. In September 2019, the state’s private boat recreational red snapper season was open for only five days and yet the federal system says somehow Mississippi produced 2,482 trips per day, harvesting 68,997 pounds of red snapper every day for a total of 344,984 pounds in just those five days. In 2020, the Mississippi season was open for a single day in September and the feds say anglers made 980 trips that day and caught 32,892 pounds of red snapper. In contrast, the most trips the Mississippi state data system – Tails ‘n Scales – has ever logged in a single day is 513, with an average of 95 trips per day over the last four years. Topping it all off, in 2015 the federal survey system in use at the time initially reported not a single red snapper had been landed in Mississippi at all!

Alabama state officials have a similar tale to tell, and they have resorted to telling it graphically.  On a single day in 2017, the federal cryptocurrency data system says recreational anglers in private boats made 16,883 red snapper trips from Alabama ports. That number would require 64 percent of all the licensed saltwater anglers in the state to be snapper fishing on that one day. Using an average boat length of 26 feet, that level of activity coming out of Alabama ports would result in a solid bridge of boats – lined up bow to stern – more than 83 miles long. The most intense day in 2019 would result in a line of boats more than 64 miles long, and in 2020 that line would have to be 44 miles long.

That level of activity is simply impossible.

Both states’ reporting systems are mandatory, with highly controlled systems for anglers to register their snapper trips and harvest. Since the coasts of both states are small and relatively easy to monitor, state officials have a high degree of confidence in their numbers. The frustration of Mississippi and Alabama officials is palpable and understandable as all those examples and more have been presented many times to NOAA Fisheries.

At its meeting in June, the Gulf Council refused to force calibration on the states until 2023, when a benchmark stock assessment may provide some clarity into all the various data streams and give a true stock status. At the August meeting, NOAA Fisheries essentially rejected that decision and attempted to force each Gulf state to reduce its quota by 23 percent to account for the supposed overages of Mississippi and Alabama. Thankfully, the Council rejected that proposal and held firm on the 2023 timeline, but the calibration debacle remains in limbo, and the next Gulf Council meeting is looming Oct. 25-28 in Orange Beach.

Like a good federal government agency, NOAA Fisheries believes its data is the only right data, but there is a lot riding on data that reflects 83-mile-long boat bridges in Alabama, and swings from zero red snapper in Mississippi to 69,000 pounds per day in just a few years. Rather than continue to insist it is always the smartest entity in the room, NOAA Fisheries should work on being a better partner to the Gulf states as well as the angling public, and commit to getting to the bottom of these wild data discrepancies before cramming down such a damaging, punitive measure.

The one thing the adversarial, bizarro world of red snapper management has taught over the years is that there is always new and better information to take into account and always more to learn. Unfortunately, the smartest person in the room is often the only one in it incapable of learning anything new at all.